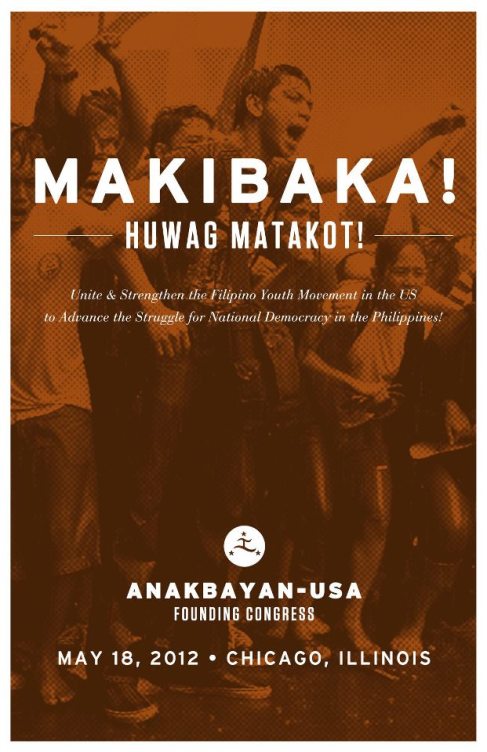 Unite and Strengthen the Filipino Youth Movement in the U.S.

to Advance the Struggle for National Democracy in the Philippines!

“Only through militant struggle can the best in youth shall emerge.” -Jose Maria Sison

Anakbayan was founded on November 30, 1998, one hundred and thirty-five years after the birth of Andres Bonifacio, the working class revolutionary leader who founded the Katipunan and fought for national liberation against Spain.  It was formed to take up the historic task of arousing, organizing and mobilizing a powerful key force in Philippine society, the Filipino youth.  In 2001, only three years after its establishment, Anakbayan emerged as one of the leading forces in mobilizing hundreds of thousands of youth in the massive people’s uprising now known as “People Power II,” which ousted President Joseph Estrada.  Since then, Anakbayan has consistently been at the forefront of the Filipino youth movement in advancing the struggles of oppressed and exploited communities nationwide for genuine independence and democracy in the Philippines.

As soon as Anakbayan was founded in the Philippines, migrant and US-born Filipino youth heeded its call to continue the Katipunan’s unfinished revolution of 1896. Progressive Filipino youth and student organizations across the US immediately affiliated with Anakbayan and, in 2002, finally established the first overseas chapter in Seattle. Since then, Anakbayan has spread across the country to major cities with large concentrations of Filipino youth, including Los Angeles, East Bay, New York, New Jersey, San Diego and Silicon Valley.

Anakbayan chapters in the U.S. have been at the forefront of protecting the rights and welfare of our kababayans by linking and raising social justice issues here in the U.S. to the struggles of the oppressed and exploited back home in the Philippines. Anakbayan has fought against budget cuts, struggled to defend immigrant rights, linked arms with workers to recover stolen wages and sought justice for trafficked workers.

Now, we are confronted with  a protracted global economic crisis and rising fascism. Currently in the United States, 1 out of every 2 youth is jobless while thousands continue to lose their jobs from mass layoffs. Meanwhile, higher public education remains inaccessible to most students as tuition fees continue to increase at an annual average of 8% nationwide, with some public universities raising tuition by as much as 31%. As private detention centers rake in profit, the Obama administration carries out record breaking deportations, totalling 1.2 million immigrants since he was elected into office. Undocumented youth continue to live in a nightmare as the DREAM Act mutates into a selective military draft for immigrant youth used as frontliners in countless imperialist aggressions in our home countries.

In anticipation of a surge in people’s resistance, we see the rise of a police state through the enactment of the National Defense Authorization Act of 2012 (NDAA) and other repressive laws like Cyber Intelligence Sharing and Protection Act (CISPA) and HR 347 “Anti-Protest Law”.

In the Philippines, the struggle continues to intensify as the crisis of the semi-feudal and semi-colonial society worsens. True to his class, the landlord President, Noynoy Aquino, continues to be pro-imperialist and pro-big business and landlords. Clearly, the Filipino youth has no bright future within the current system. There is no other way for the youth but to fight back.

Today, as the people and working class all over the world militantly march for International Labor Day, we announce the upcoming Founding Congress of Anakbayan USA, the first overseas national chapter of Anakbayan on May 18, 2012 in Chicago. This will be the first national Filipino youth movement that clearly recognizes the integral role of the US-born and migrant Filipino youth to the struggle for national liberation and genuine democracy in the Philippines.

Through Anakbayan-USA, Filipino youth across the US are unifying and strengthening their community organizing efforts in order to carry forward the historic torch of courageous and daring youth that paved the way before us.  From the legacy of the anti-colonial resistance of the Katipunan and the Kabataang Makabayan that defied the iron fist of the Marcos dictatorship, we will continue to advance the struggle for national democracy in the Philippines until its eventual victory.

We call on the Filipino youth to defiantly declare “Makibaka! Huwag Matakot!,” join the struggle and don’t be afraid! Let this call resound throughout the campus halls, factories, and in the streets. Let us unite and build this movement. Let us fulfill our revolutionary role and serve the people!