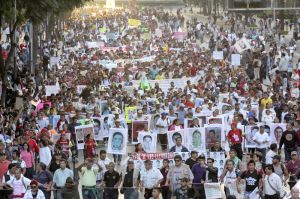 Anakbayan Silicon Valley stands in solidarity with El Comité del Norte de California en Apoyo de Ayotzinapa (Northern California Committee in Support of Ayotzinapa) and the peoples of Mexico in condemning the Mexican government for its crimes against the people, and in demanding justice for the 43 missing (and now presumed murdered) students in Ayotzinapa-Guerrero. As a national democratic organization of Filipino youth and students whose people have undergone the same brutal state repression, we hope our voices and actions will contribute to the people’s movement already swelling in Mexico to hold the government accountable and to bring true democracy to the country.

We recognize that what happened to the Ayotzinapa 43 is not an isolated incident, but a link in a long chain of systemic violence threatening youth. The Ayotzinapa 43, many from rural and peasant communities that have been historically neglected and even criminalized by the government, were merely fighting for their right to an education, which was being threatened by budget cuts to their school. They have joined the ranks of other oppressed youth in Ayotzinapa: the 26 students brutally beaten by the state police in 2013, the three students who were gunned down in a 2011 demonstration, and the protestors attacked for demanding more school funding in 2007. Instead of responding to the needs of its own youth, the Mexican government instead continues to silence anyone that rises up against the status quo, labeling these youth as guerrillas and terrorists when in fact they themselves are the victims of state terrorism.

The Filipino youth are all too familiar with state violence, from the brutal attacks on youth members of Kabataang Makabayan in the ‘70s and ‘80s, to the murder of Freddie Ligiw and illegal arrest and detention of Guilly Cadano and Geary Salonga earlier this year, all fellow comrades in Anakbayan in the Philippines. Just last month, military and paramilitary forces terrorized indigenous Manobo communities in Mindanao, who live in similar rural and peasant conditions as the Ayotzinapa 43. The tribe’s houses, and even their schools, were burned and destroyed, causing more than 1,700 of them to flee their ancestral land for safety. Youth in the Philippines, from urban areas to the countryside, share the same desire for education as youth in Mexico, and unfortunately they are met with the same state repression.

Youth and students are fighting an uphill battle to regain their right to education even in the US, where the government prioritizes spending on defense and prisons over its students, despite national student debt amounting to $1.2 trillion. Here in the South Bay, tuition costs of CSUs have more than doubled since 2007, and tuition fees even in community college are on the rise. Through our local campaign, Project FLAME, we have been collecting stories of struggle from Filipino youth. We have learned that our community has also been hit hard: increased drop-out rates due to an education system that does not support working youth and families; increased military presence in high schools; unaffordable tuition costs; and the struggle to find work post-graduation while having to pay for debts that follow us for the rest of our lives. We, too, as youth facing state-backed violence on our education system, must learn from the Ayotzinapa 43 and fight back.

Anakbayan Silicon Valley realizes the need for a collective movement of youth and students, workers, peasants, and all sectors of society in order to truly bring about change. We are outraged by the continuous violence youth face at the hands of the state, but are inspired by the militancy of the Ayotzinapa 43. In their spirit, we call on the youth and student movement in the US and in the Philippines to mobilize in solidarity with the national strike in Mexico for Ayotzinapa on November 20th. We lend our strength to all those fighting for the Ayotzinapa 43, and all those fighting to bring justice to their country.

Justice for the Ayotzinapa 43!

From Ayotzinapa to Oaxaca: Free all political prisoners!