Since 1899, U.S. troops have maintained their presence in the Philippines through permanent military and naval bases and through military agreements and treaties that undermine Philippine sovereignty.

Today, President B.S. Aquino continues to strengthen the U.S.’s presence in the Philippines by failing to defend its people from US war crimes, by sacrificing Filipino civilian and police/military lives for U.S.-directed military operations, and by letting U.S. military roam the Philippines freely, in exchange for political backing and military aid that Aquino has used for counter-insurgency tactics against the Filipino people. Aquino has strengthened his counter insurgency tactics against activists, resulting in countless human rights violations, a spike in illegal arrests and detentions, and extra judicial killings.

In commemoration of #PHSolidarityWeek, Anakbayan Silicon Valley (ABSV) stands with BAYAN-USA in raising awareness about the struggle of political prisoners in the Philippines. From February 12 to 18, ABSV will conduct a book donation drive to build libraries in the political prisoners’ cells and spread awareness of the conditions they face—a small gesture of our solidarity, as we concurrently fight for their freedom and the genuine liberation of our homeland. The prisoners currently have nothing to read, so anything will be much appreciated. Letters of support are also welcome from book donors.

As of November 2014, the number of political prisoners had risen to 491, of which 220 were arrested under the BS Aquino regime. Many of these political prisoners are youth and students, including Kabataan Partylist Regional Chair Guiller “Guilly” Cadano and Anakbayan Central Luzon member Gerald “Geary” Salonga. In August 2014, the Armed Forces of the Philippines (AFP) forcibly abducted Guilly and Geary on trumped up charges of “illegal possession of firearms and explosives.”

Many youth organizers in the Philippines fighting for education and basic human rights stand in the face of militarization and government suppression. Members of ABSV recognize their struggles as we fight for our education here in the Bay Area through Project FLAME, a local campaign to address the struggles of Filipino youth with the education system. ABSV holds the US and Philippine government accountable for putting militarization over education, which is made clear by the amount of money and resources that support military operations instead of schools and educational programs.

Free all political prisoners! | Books not bombs! | Education not militarization! 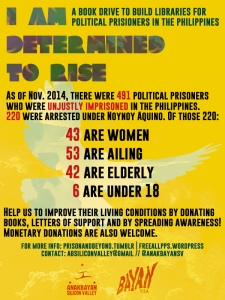